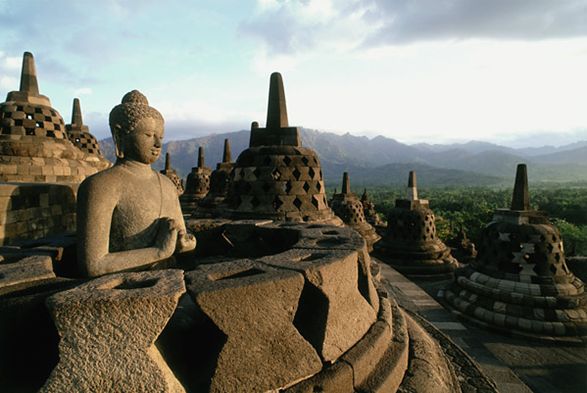 The popularity of curried meats and vegetables in Balinese cuisine indicates a clear Indian influence. For instance, turmeric has a significant role to play in Balinese fare. The simplest use of the spice is in the preparation of nasi kuning (yellow rice), a festive dish flavored with coconut milk. Soup noodles and meatballs have been borrowed from China. Ginger, a popular ingredient used in Chinese cooking, is also widely utilized.

Known the world over as the Spice Islands, Bali has had a considerable influence on neighboring Southeast Asian cuisines. The province is one of the largest producers of nutmeg, cloves and pepper in the world. Earlier, spices were very expensive because they had to be carried by land across large distances to Europe and the Far East. But once the sea route to the Spice Islands was discovered, they became cheaper and more readily available in faraway destinations, further developing the cuisines in those territories.

Satay (seasoned skewered and grilled meat, also known as sate) is hugely popular in Indonesia, while nasi goreng (fried rice) is the national dish. Pork is rarely eaten in the country as Islamic tenets prohibit its consumption. However, the Hindus in Bali are renowned for their pork dishes such as babi guling or a whole pig stuffed with spice paste and vegetables, rolled over charcoal made with dried coconut shells and grilled until well done. Other Balinese dishes that have found worldwide fame include gado gado,  a salad made of blanched vegetables and dressed with peanut sauce, and murtabak, a pancake with sweet and savory fillings. Candlenuts, waxy tropical nuts similar in flavor to macadamia nuts, are used in several Balinese dishes.